A guard dog is meant to provide its owner with protection, keeping a watch over them, alerting them of any suspicious activity that might take place in their vicinity and even protect them from harm. In order to carry out all these tasks effectively, guard dogs need to be intelligent, attentive, strong enough to physically protect their owner from danger, and most of all they need to be well trained. There are a number of breeds out there, ranging from small ​breeds to larger ones, each having been carefully bred in order to equip them with a set of strong and refined natural instincts.

Normally, smaller ​breed guard dogs are referred to as watchdogs since they have the appropriate instincts needed to function as a guard dog but lack the physical strength and the intimidating presence that many larger breeds possess. According to “Watchdogs or Guard Dogs: Do Anti-Corruption Agencies Need Strong Teeth?” By Gabriel Kuris, smaller guard dog breeds are called watchdogs since they are inferior to larger breeds. In fact, most experts will advise you to not go for a smaller breed at all if protection is your primary requirement. Unfortunately, everyone does not have the space needed to keep a larger dog, especially if they live in an apartment or rented area that often impose restrictions on the kind of pets you can keep in the building. A smaller dog will not be able to provide you with effective protection against trespassers, nor will they be able to scare off potential intruders with their presence, however, they do possess sharp instincts that allow them to alert you to danger and point out suspicious activity.

Now let’s take a look at some smaller dog breeds that can make effective watchdogs for your home, and if you manage to train them properly, you can even channel their aggression in the right direction in order to make them more menacing.

The Following Are ​Ten Great Small Breeds of Guard Dogs: Beagles have a strong hunting instinct that was specifically bred into them since these dogs were once used as hunters, nowadays these dogs are kept as pets by people who want to have a capable watchdog by their side. Their hunting orientated nature makes them quite single-minded at times, meaning that they are easy to distract and they almost never get along with smaller animals. Beagles are also hard to train because of their nature, however, if their owner is strong-minded and makes sure to teach their dog proper discipline then they can become loyal and loving pets.

What makes Beagles such great watchdogs is their aggressive nature towards strangers and their distinct, loud bark that can immediately alert their owner and also startle trespassers. Keep in mind that if you plan on keeping a Beagle, you need to train it well enough to obey every member of your family. This dog breed has a small yet solid frame, they are agile and pack more power than one might think based on their size, these dogs were originally bred for vermin control and have a strong prey drive in them. This makes them challenging to have around smaller animals, they are also highly territorial by nature and will act aggressively towards anything or anyone new. While their size and traits make them a great guard dog for apartment dwellers, these dogs need to be socialized from an early age in order to bring their aggressive nature under control, otherwise, you might find yourself having a hard time whenever you have guests coming over. Despite its size, the Bull Terrier manages to look dangerous thanks to its solid-looking body and its distinctly shaped head. This dog breed was bred for pit sports, where people would leave dogs in closed spaces, fill them with small animals such as rats and then gamble on how much rats the dog will be able to consume. Due to this background, Bull Terriers tend to have a strong prey drive and are also highly energetic, you need to take these dogs out for walks regularly, otherwise, ​a Bull Terrier can become restless.

Their prey drive makes them aggressive by nature, this, coupled with their suspicious nature makes them effective small guard dogs. One should keep in mind that Bull Terriers can become especially aggressive towards strangers, which is why they must be trained carefully and firmly. Chow Chows look a lot like adorable fur balls and can become incredibly loving companions, however, you should not let this dog’s looks deceive you. The Chow Chow breed is the most closely related to wolves, Chow Chows tend to have a muscly body underneath their fur and are quite powerful. Some types of Chow Chows can weigh as much as 70 pounds, while some types do not cross 40 pounds (making them ideal small guard dogs).

These dogs have a background in hunting, guarding, and herding that has helped them develop a strong urge to protect. Along with being strong, protective and cute, Chow Chows are also very loyal, they like forming a strong bond with one person. While Chow Chows are great watchdogs, they can be hard to train, their protective nature can quickly become overprotective if you do not socialize them often from an early age. Also, they require a firm hand in order to be trained properly. 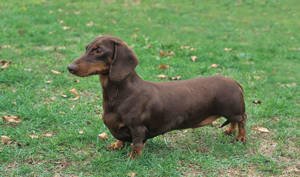 The Dachshund is a dog breed best suited for people who live alone and are not that sociable themselves since these dogs are quite aggressive, suspicious, and find it very hard to let their guard down around new people. Dachshunds were bred to serve the same purpose as Boston Terriers, however, they were capable of even hunting down badgers, meaning that they have aggression and a strong prey drive etched into their DNA.

The biggest problem with these dogs is that they only bond with a single person, making them an impractical family pet that will only show loyalty and friendliness towards it “true” owner. Their aggressive nature makes them great watchdogs since they will alert you to anyone who comes near your home and will meet them with plenty of aggression. Dachshunds are quite energetic as well, meaning that they need to be taken out often to avoid restlessness and bad behavior. The Lhasa Apso breed has been known to serve as a guard dog in ancient Tibetan temples, these dogs look cute and adorable due to their small size and wavy fur coat, but they are quite intelligent and act as serious guard dogs. Their high intelligence levels make these dogs easy to train once you figure out how to manage their slightly stubborn nature, they usually are not friendly towards strangers and can even nip at times.

Lhasa Apso dogs like peace and quiet, loud noises upset them and therefore, they are not recommended to people who have children. Like many small dog breeds, Lhasa Apsos can become loud when upset, however, if you train them correctly and treat them respectfully, they can become loyal and protective pets. Poodles come in a standard size and a mini size, both variants possess high levels of intelligence and plenty of aggression as well. An important thing to note about owning a poodle is that these dogs not only require physical exercise but also mental stimulation, otherwise they can become restless and their aggression can increase. Standard size poodles can grow to be quite big and make good guard dogs since they have a protective nature, their mini version lacks physical strength but is equally protective and has sharp teeth that can produce a nasty bite. Pretty much any Terrier out there has a strong predatory instinct that makes them aggressive, willful, and a bad idea to have around smaller animals. However, the Manchester Terrier is also quite intelligent and can be taught to become a great pet as long as it is socialized and trained carefully. These dogs can be energetic and lively and usually do well with children as long as they are given their space and approached gently.

If you are looking for a combination of a small guard dog and a fun family pet then a Manchester Terrier can be a good option. The Shar Pei hails from China and is a pretty rare dog breed, most people only get to see these dogs during dog shows in the US. Before China was revolutionized, Shar Peis were popular hunting and fighting dogs, however, they became dangerously close to becoming extinct, in order to preserve this breed, a few hundred Shar Peis were smuggled into the USA.

Any Shar Pei that you find in the US today will probably hail from the few hundreds that were smuggled here, meaning that there has been a substantial amount of inbreeding that has led to this dog breed’s health deteriorating. So what makes them good guard dogs? They have an incredibly aggressive nature that makes them formidable small guard dogs, however, only experienced dog owners should try and tame Shar Peis since they can be a handful. Another rare dog breed, Skye Terriers are known for being loyal and highly protective of their owners, they are also aggressive by nature and bad around small animals. Skye Terriers can become a threat to themselves if they become too energetic, frequent exercise can lead to their bone joints becoming damaged. Meaning that Skye Terrier require very little exercise, making them perfect for keeping in small spaces, this coupled with their protective nature makes them quality small guard dogs.

Keep one thing in mind before deciding to adopt one of these breeds; all of these dogs have an aggressive nature which must be regulated through careful training, otherwise, you might find that your guard dog could become unruly, or even take its aggression out on you.

If you are interested in adopting a bigger breed then you can read about them here on our best guard dogs page.